Feeling sentimental about WINGSForum? Want to see what happened at a glance? Check out our new short clip here or below! 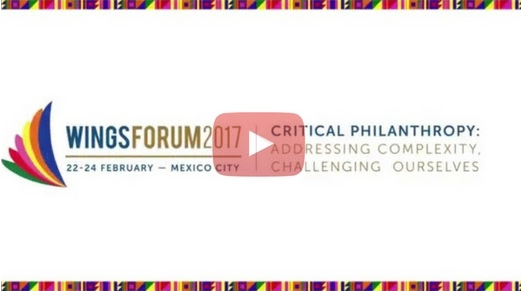 Shazia Amjad shares with us The Pakistan Centre for Philanthropy’s new report on “The State of Individual Philanthropy in Pakistan”. Read the interview here.

WINGS gets a seat on the Key FATF Consultative Forum!

In a development that signals an important victory for Non-Profit Organisations (NPOs), including institutional philanthropy, a global group of NPOs have secured seats on a key consultative forum of the Financial Action Task Force (FATF), a policy body that sets international standards for combatting money laundering and terrorist financing. At the end of February, the task force formally invited the Global NPO Coalition on FATF to fill four seats on its Private Sector Consultative Forum (PSCF). The European Foundation Centre (EFC) will hold one of these seats on behalf of the Worldwide Initiatives for Grantmaker Support (WINGS) for the initial phase. Read more here.

CAF launched their new report on an overview of charitable giving in the UK!

CAF has been producing the UK Giving report since 2004, and has been tracking giving in the UK for several decades. In that time, there have been a number of changes to how the study is conducted in terms of approach and questions asked. As it is mentioned within last year’s report, they listened to charities and their thirst for greater knowledge about giving behaviours in the UK and took the decision to move to a monthly tracking study rather than interviewing at four separate points in the year. This report covers the first year in which the research has been conducted monthly through YouGov’s online panel. Read the report here.

Founded in May 2007, Narada Foundation (Narada) is committed to a mission of “Fostering Civil Society” with the vision of “A fair and just society where every heart carries hope” Narada is the first grant making foundation in China that is dedicated to providing financial support to grassroots NGOs, while most of the existing foundations across the country at the time of its launch were operating foundations. Read the full post here.

Job Opportunities in the Sector

A rare opportunity for funders and indigenous leaders/groups to meet together in a small indigenous Māori community, only an hour from the capital city, that initiated a tribal development plan 30 years ago. Witness the development.

Innovation is playing an increasingly crucial role in the success of communities, organisations and even countries and can fundamentally shift the impact of philanthropy. In May 2017, Philanthropy New Zealand are hosting the country’s largest gathering of leaders involved with philanthropy. Held at Te Papa, Innovate for Impact will bring together global and local thought leaders from philanthropy, business, iwi, government, investment and the community sector along with innovators for the two-day summit.

Join the Ottawa-Gatineau for the 2017 Community Foundations Conference as they welcome leaders from the foundation and philanthropic sector to Canada’s capital.This international gathering is a premiere launching pad for new ideas and connections. Celebrate Canada’s sesquicentennial and explore how to can strengthen a sense of belonging organisations and communities.

Did you know that WINGS members are eligible for a free or discounted subscription to Alliance Magazine? Be sure to reach out for more information.