The next month will see the NFL’s cream of the crop battle in the playoffs for the chance to make it to Santa Clara for Super Bowl 50. With the playoff seeding now complete, fans across America (and elsewhere) will be making their predictions to try and determine who makes it to the big dance.

Today, we’re unveiling our playoff predictions – with a twist. Rather than focusing on matchups, injuries and form, we’ve decided to take a look at how the playoffs would unfurl if games were determined by the generosity of each team’s fans. Using data from the ‘How America Gives’ project, we’ve taken a look at which teams might emerge from each conference, and how they would fare against one another in the Super Bowl.

First, an explanation of how we’ve put together the scores. How America Gives provides each area (state/city) with a ‘Giving ratio.’[1] This is based upon the percentage of adjusted gross income given to charity, as determined using the charitable deductions on income-tax forms, with data from the IRS, census, and elsewhere. The project also gives a ‘median contribution’ (donation) for each area. We thus allocated two data points to each team to use as the basis for generating scores.

To replicate home advantage, if the home team did not ‘win’ based upon the giving ratio, we gave them the opportunity to ‘win’ using the median contribution scores. (Incidentally, it wasn’t until the Super Bowl that using the median contribution would make a difference.) We then multiplied each team’s giving ratio by 7 – the number of points for a touchdown and extra point.[2] This led to the (surprisingly) plausible scores that you can see to the right.

In the NFC, Seattle wins on the road against the third-seeded Vikings, whose NFC North rivals Green Bay continue their recent woes by losing to Washington. Neither the Seahawks nor the Redskins can knock off Arizona or Carolina though, and the top two seeds battle for NFC supremacy. In the end, it’s the Panthers who see off the Cardinals, led by their soon-to-be MVP quarterback Cam Newton, whose generosity sets the foundation for their victory.

The AFC playoffs begin with both of the wildcards – Kansas City and Pittsburgh – losing on the road, to Houston and Cincinnati respectively. The Texans and Bengals then see off the AFC’s powerhouses of Denver and New England, setting up a surprising clash in Cincinnati. Despite home-field advantage, the Bengals are defeated by the Texans, with star defensive end JJ Watt leading the way. 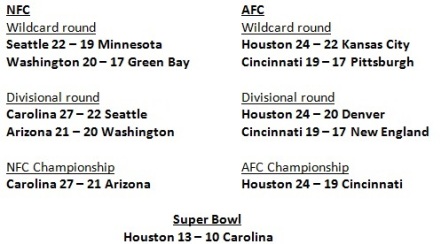 To the Super Bowl, then. And here’s where it begins to get really tense. Using the giving ratio, it’s the Panthers who lead, whereas the Texans have the edge if we turn to median income. Sadly for Carolinians, the AFC representative is the designated home team for the Super Bowl, which means that it’s Houston’s Head Coach (and unorthodox fundraiser) Bill O’Brien lifting the Lombardi trophy.[3] (The Texans have an impressive foundation too, so it’s well deserved.)

The NFL is growing in popularity in the UK, but as it as generous as our top sporting league? Well, in 2013-14 revenue for the Premier League was £3.26bn, whilst the Football Foundation (funded by the Premier League, FA and the Government via Sport England) spent £29.93m on charitable activity at the same time. This works out as 0.92% of turnover being spent on charitable activity. By comparison, over the 2014 season the NFL had revenue of $11.09bn. Over the same time period, the NFL Foundation spent $28.44m, which works out as 0.26% of turnover being used for good causes – proportionately much less than that given through the Football Foundation.

Of course, many NFL teams and players do a great deal to support charities individually, but it’s perhaps fair to say that the NFL (whose Commissioner is paid about $44m a year) isn’t matching the high levels of generosity of Americans as demonstrated by the How America Gives data, and America’s consistent high ranking in CAF’s ‘World Giving Index.’ Whilst initiatives such as A Crucial Catch (the NFL’s breast cancer awareness scheme) have been well received, there is certainly the potential for the NFL to do more to support good causes. If our projections hold and the Texans become the charitable Super Bowl champions, perhaps that will be the impetus for even greater support for charities from the NFL in 2016.

[1] For simplicity, for the Carolina Panthers we used data from North Carolina and for the New England Patriots data from Massachusetts, using the states in which each team is based

[3] As this match-up used median income, to generate an NFL-style score we divided each team’s median income by 7 (a converted touchdown) and then again by 50 – it is the 50th Super Bowl, after all.