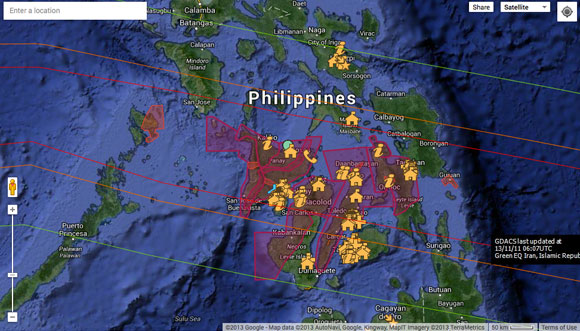 The Media has called Typhoon Haiyan (locally known as ‘Yolanda’) the strongest tropical cyclone in recorded history. The storm made landfall in Samar, central Philippines, on Friday, with winds reaching 235 mph. Casualties are estimated at 10,000 in Leyte province alone.

WINGS network participant Give2Asia has opened the Typhoon Yolanda Recovery Fund and is working in the field to coordinate relief. Give2Asia has responded to previous disasters in the Philippines and is encouraging its partners to utilize the Google Crisis Alert Map to help coordinate their efforts. The map lists shelters, supply drop-off sites and other critical information.

Also aiding in relief is World Vision. In 2013 the Bill & Melinda Gates Foundation granted the humanitarian organisation funds “to provide emergency response to flood-affected communities in the Philippines.” World Vision has reported that at least 4 million people have been affected by Yolanda and predicts the number of fatalities will rise as communication is restored and access improves, adding that the greatest needs in the evacuation areas include food, clean water and emergency shelter supplies. You can donate and sponsor children affected by the disaster via World Vision here.

Other news and resources

One thought on “Yolanda relief efforts underway in the Philippines”